Wadi Rum – one of the most beautiful deserts in the world, enchants with fairy-tale landscapes. Hills protrude from the sandy expanses, creating amazing rock formations similar to bridges, mushrooms or pillars. The desert is dominated by a shade of red interspersed with yellows, grays and even purple. For centuries, travelers have been under the spell of Wadi Rum. Currently, it is the second (after Petra) tourist attraction in Jordan.

Wadi Rum is a well-organized tourist business, managed by local Bedouins – people with high personal culture, friendly, fluent in English, often with higher education. They offer tourists accommodation in Bedouin tents, located in charming corners of the desert, prepare traditional meals and organize rides in their Toyota cars, which have long been replacing camels. The latter stand sadly near the camps, hiccuping until some stranger wants to look at the desert from their crests.

Wadi Rum contradicts the opinion that Arabs are disorganized and always late. Everything runs smoothly and quickly. Tourists go to the camps of their choice, meals are on time and car drivers efficiently show the most important places in the desert. It is a kingdom of men, women and children who live in the nearby towns and long for the return of their breadwinners.

There is one village with brick houses in Wadi Rum. To get to it, you need to follow the only asphalt road in this area. You need to stay at the Visitor Center, where you can buy admission tickets. If you have a Jordan Pass, please have your document stamped. If you don’t have an overnight stay or tour booked, don’t worry. Already in the Visitor Center you can meet Bedouins who will offer it to you. If they are not there, then continue slowly to the village, where there will be plenty of bidders. 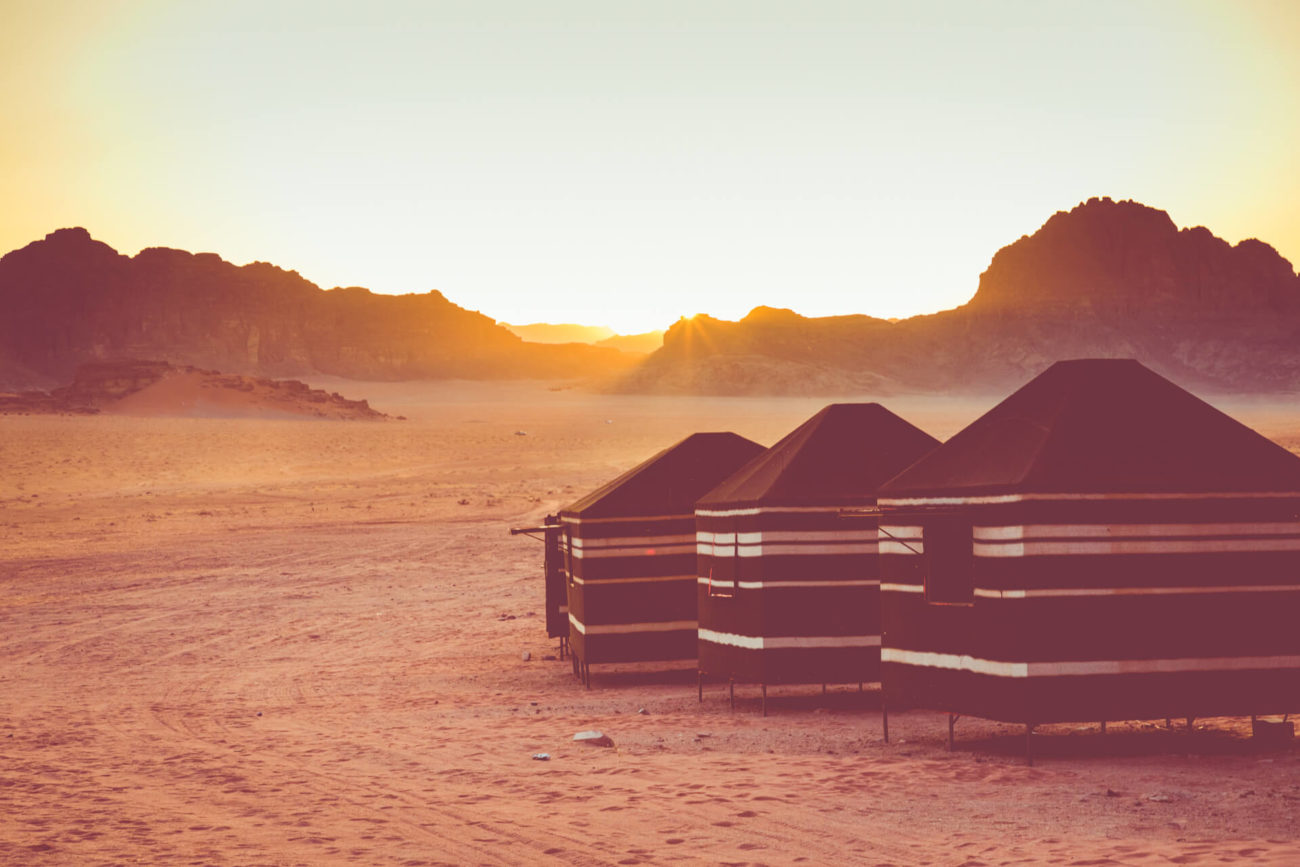 Right behind the Visitor Center there is a very characteristic rock called the Seven Pillars of Wisdom. The autobiographical novel by Tomas Edward Lawrence bears the same title. Lawrance is a character that has permanently entered the history of these lands, and is currently used to create the image of Wadi Rum. Tomas Edward Lawrence was a British traveler and archaeologist. He served as an officer in the British Army in the Middle East, contributing significantly to the victory of the Arab revolt against the Ottoman Empire. His colorful life inspired the creation of numerous novels, films and theater performances. The most famous work is the 1962 film “Lawrence of Arabia”. The picture was a box office success and won seven Oscars.

On our way to Wadi Rum, we had an overnight stay booked and we had an appointment with the owner to pick them up from the parking lot in the village. However, I was full of anxiety. How are we going to get to a camp somewhere in the desert? What if the camp worker doesn’t show up? What if we wait in another parking lot?
If you have the same concerns, don’t worry. At the very beginning of the village there is a large (only) parking lot where tourists leave their cars. Several Bedouins are standing at the entrance and immediately ask: Do we have accommodation? In what camp? It did not make the best impression on me. However, it turned out that these questions are not intended to convince us that their offer is better, but to find the right people. Immediately an employee of “our” camp appeared, then the owner and finally a Toyota drove up, which we were supposed to drive in the desert. The suitcases were sent back to the tents and we started our desert adventure. Everything smoothly and painlessly.
The village is small. It consists of several dozen tiny houses, built mainly of concrete blocks. Behind the fences we see sheep, goats and camels. Before making a reservation, it is worth making sure that the accommodation will not be in the village itself, as the scenery and close company of animals do not have a positive effect on the night experience. Unfortunately, the information provided on booking.com regarding the location is often not true. There are grocery stores in the village, so this is the last opportunity to replenish your supplies.

There are several characteristic points in the desert, which are successively approached by off-road vehicles filled with tourists. The number of attractions depends on the length of the tour. Prices offered by local guides are approximate and are for car hire.
The first place we reach after leaving the village is Lawrence’s Spring. Standing at the foot of the mountain, from which the spring flows from, we searched in vain for any water. The water is there, but it flows beneath the surface. This is evidenced by two trees growing in the area and clumps of bushes. 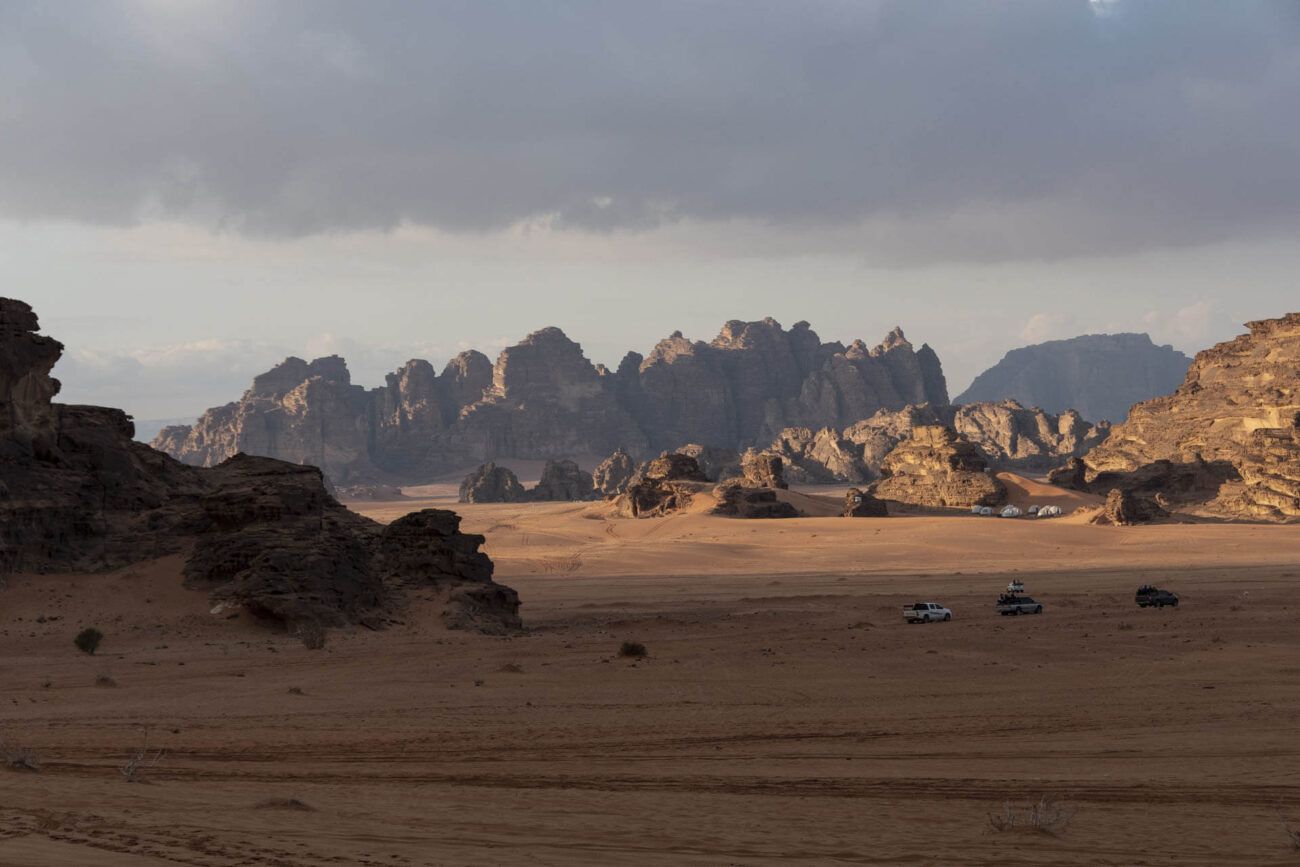 The next stop is at a tall red dune. This dune is a bit deceived because it is built in the shadow of a large rock. From the top there is a beautiful view of the surrounding area. You can try snowboarding down the hill. However, it does not work out well – there is no slippage. The guide explains that the descent is good only in high temperatures, now it is too cold (around 20 degrees).

A monumental mountain with a narrow rift in the middle called the Khazali Canyon is the third point of our trip. The trees growing at the entrance indicate the proximity of the water. Indeed, after a dozen or so meters, water appears in the canyon, making it impossible to continue hiking. However, water is not the most important thing here. In addition to the natural values, the canyon offers tourists very well-preserved drawings carved in the rock. They show people and different species of animals.

Rock forms in the desert take various forms. They are all delightful and each is unique. The rock mushroom is one of the most spectacular. A huge hat rests on a narrow leg. Erosion continues. When will the leg become so narrow that it won’t hold the hat? In 100 years? In 1000 years? What do you think?
The Wadi Rum desert, due to its unique color, has been the location of many films about Mars. The most famous are: Martian, Red Planet, Last days on Mars. This is where the Star Wars images were made, and of course most of the scenes for Lawrence of Arabia. 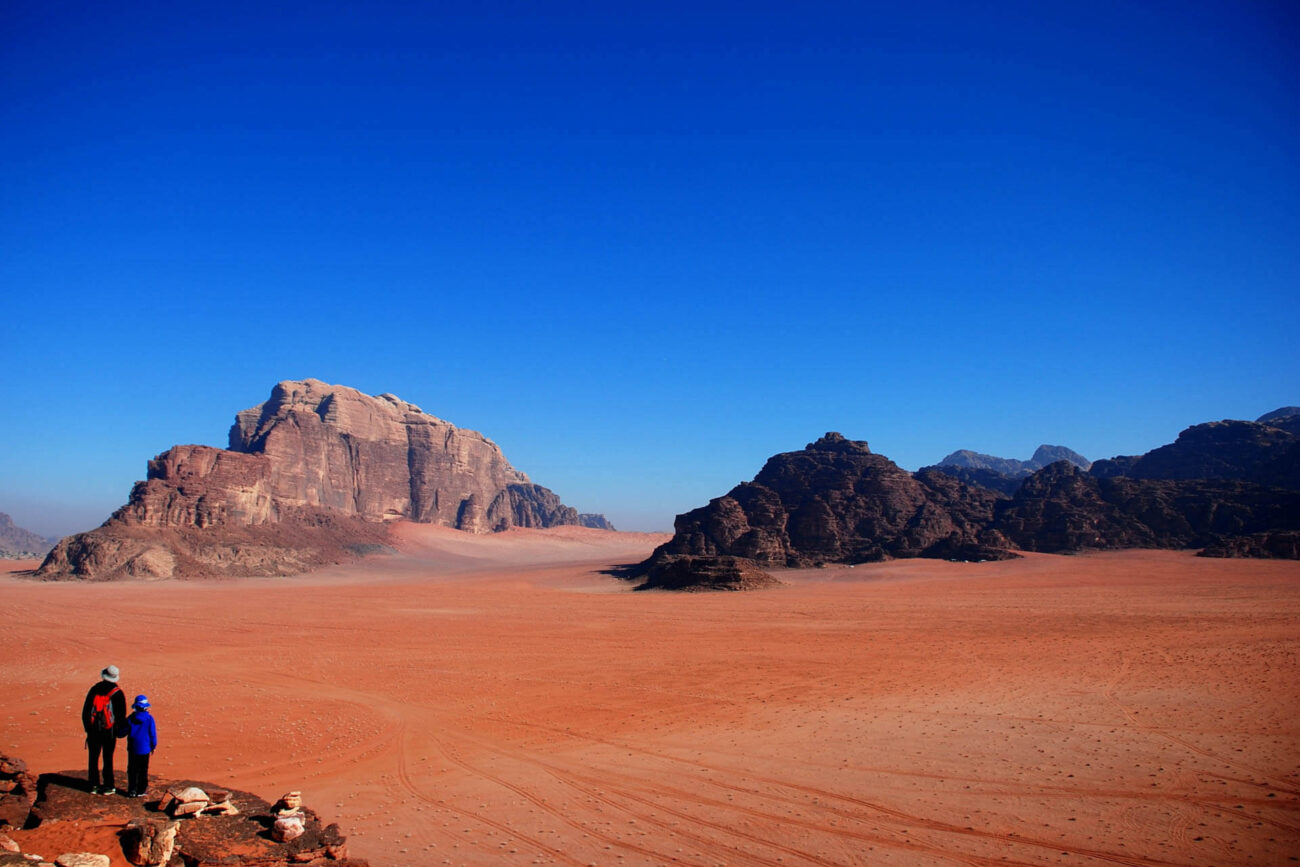 Abu Khashab Canyon was the most interesting experience for me during the whole trip in the desert. The driver left us at the entrance to the ravine, assured us that there was only one road and that he would wait for us on the other side. As usual, there is vegetation at the entrance to the ravine: small trees and shrubs. Small tufts of greenery were an interesting diversification of the ubiquitous rocks and sand. The gorge narrowed more and more until the flat, sandy canyon floor turned into rubble of rock. We were laboriously climbing, overcoming the next meters. A prize awaited us at the top. There was a wonderful sight between the rocks. In the foreground, red sand dunes, then gray-beige rocks. Now it was possible to go down to the car waiting for us. It took us about 40 minutes to walk through the ravine. 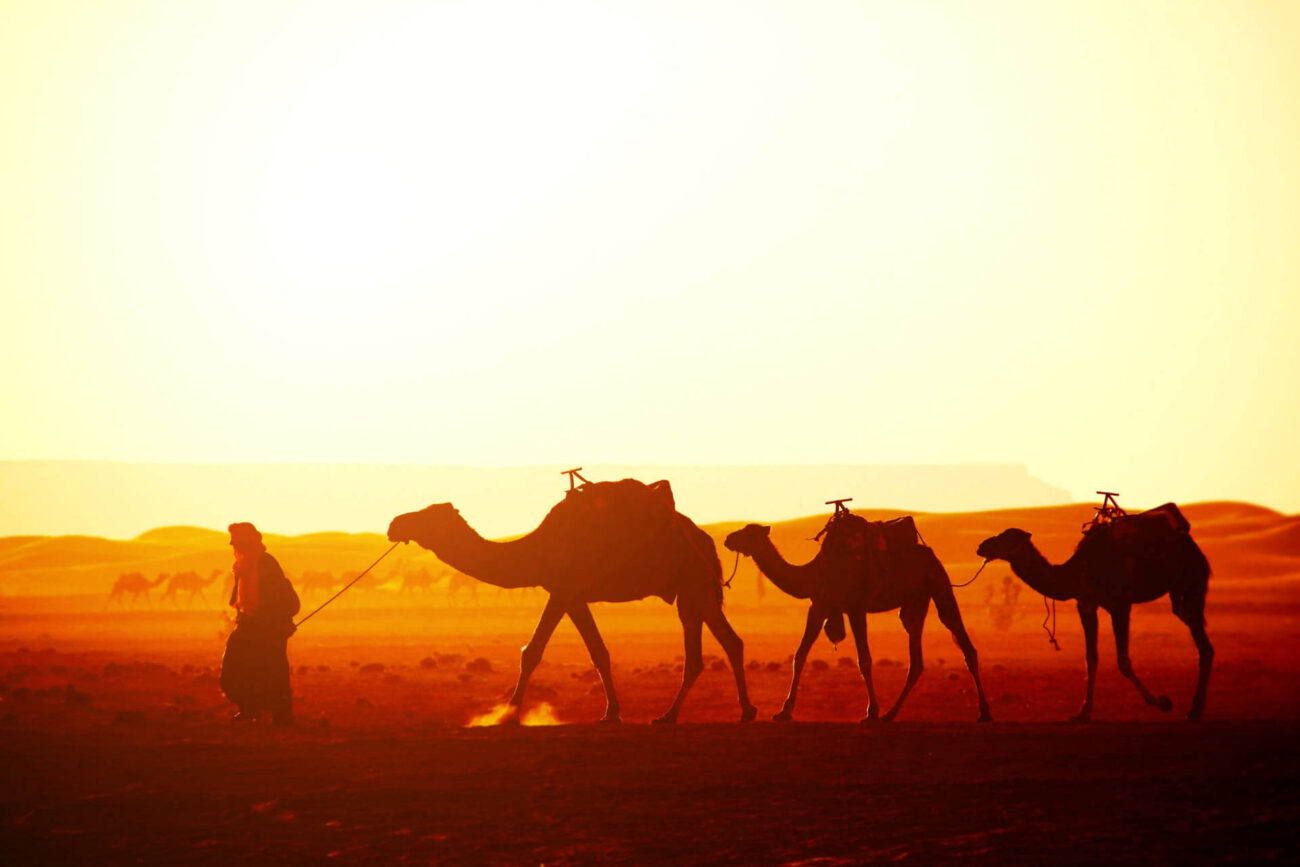 A very characteristic place is the Um Fruth Rock Bridge . The beige rocks contrast with the azure sky, creating a perfect view of the covers of folders and magazines. Climbing the bridge is not easy, but a photo on the rock remains a lifetime memento.

A very characteristic place is the Um Fruth Rock Bridge . The beige rocks contrast with the azure sky, creating a perfect view of the covers of folders and magazines. Climbing the bridge is not easy, but a photo on the rock remains a lifetime memento.

Contact
bedouin, guide, jordan, tour, trip, wadi rum
We use cookies to ensure that we give you the best experience on our website. If you continue to use this site we will assume that you are happy with it.Ok