Anyone who goes to the desert valley of Wadi Rum in Jordan wants to get to know its diversity and see as many spectacular places as possible. Most Bedouin companies that organize trips declare that the participants of the touring tour will have an earlier influence on determining the sightseeing route. However, how can people who have never been to this place know which points are worth seeing and which can be safely omitted? With them in mind, we have prepared the text “Wadi Rum in one day – trip plan”, in which we describe an exemplary plan of visiting this truly extraordinary place.

We received the following list with short descriptions in English from the company we went on the tour with. We translated it and the names into Polish. There were 11 points in the plan, while 2 more were added by the guide during the ride. Before traveling to Jordan, we did not find such a complete list anywhere that would show what to see in Wadi Rum. Nevertheless, a bit blindly, we decided to take the full-day sightseeing option, which in total lasted about 10 hours. Many tourists decide to only take a few hours’ drive around Wadi Rum, which in our opinion is not enough time to get to know this place. Even the whole day is not allowed to fully enjoy it. 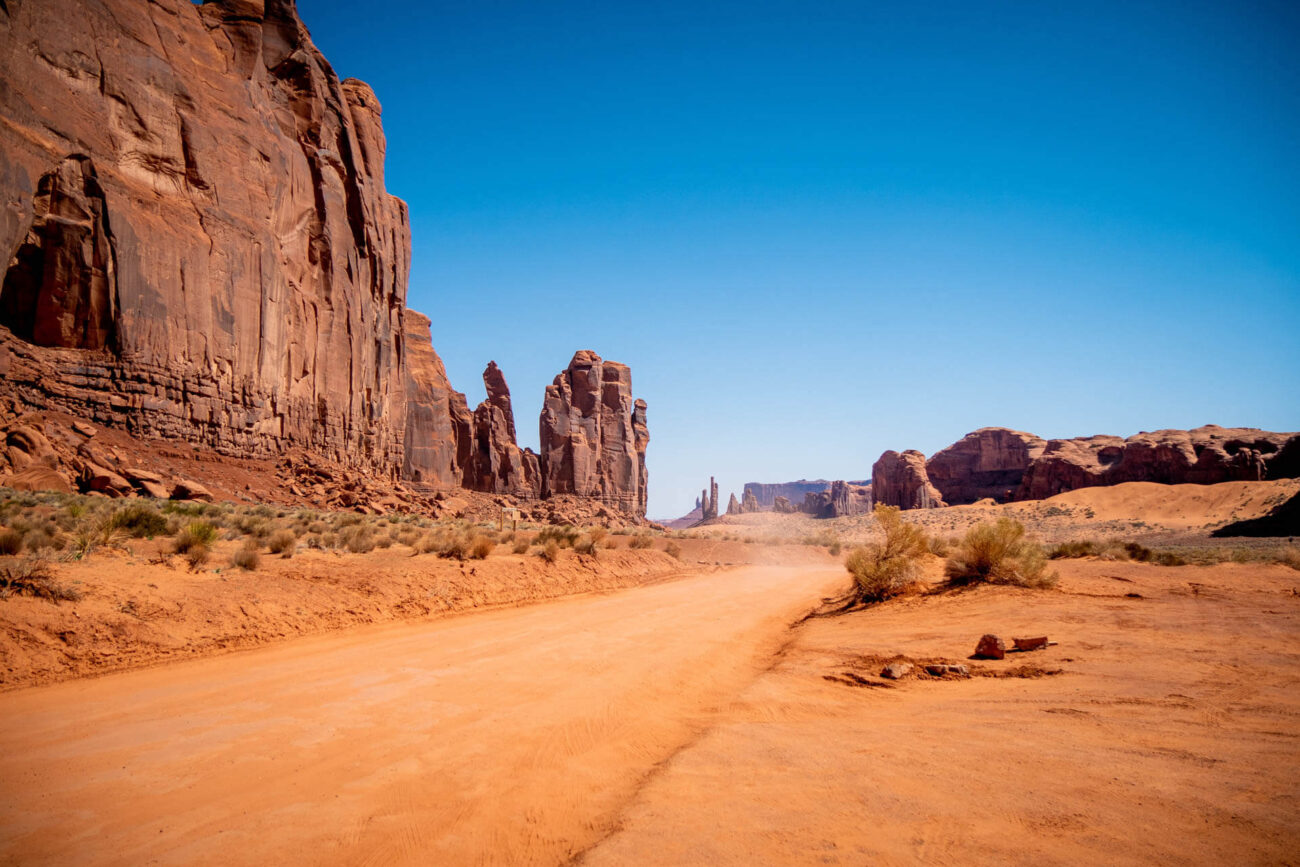 Water spring with a view of Wadi Rum. During spring, you can smell the herbs in the area. The first item on the list was Lawrence’s Spring, located near our Bedouin camp. On one of the blogs about Jordan, I read that Lawrence Spring is so uninteresting that you can skip it when visiting Wadi Rum. The spring itself may not be very impressive, although I like its somewhat hidden location. To get to it, you have to climb a bit along a bumpy path among the stones. However, the most impressive view is the view from above. It is worth coming here, if only for this reason! 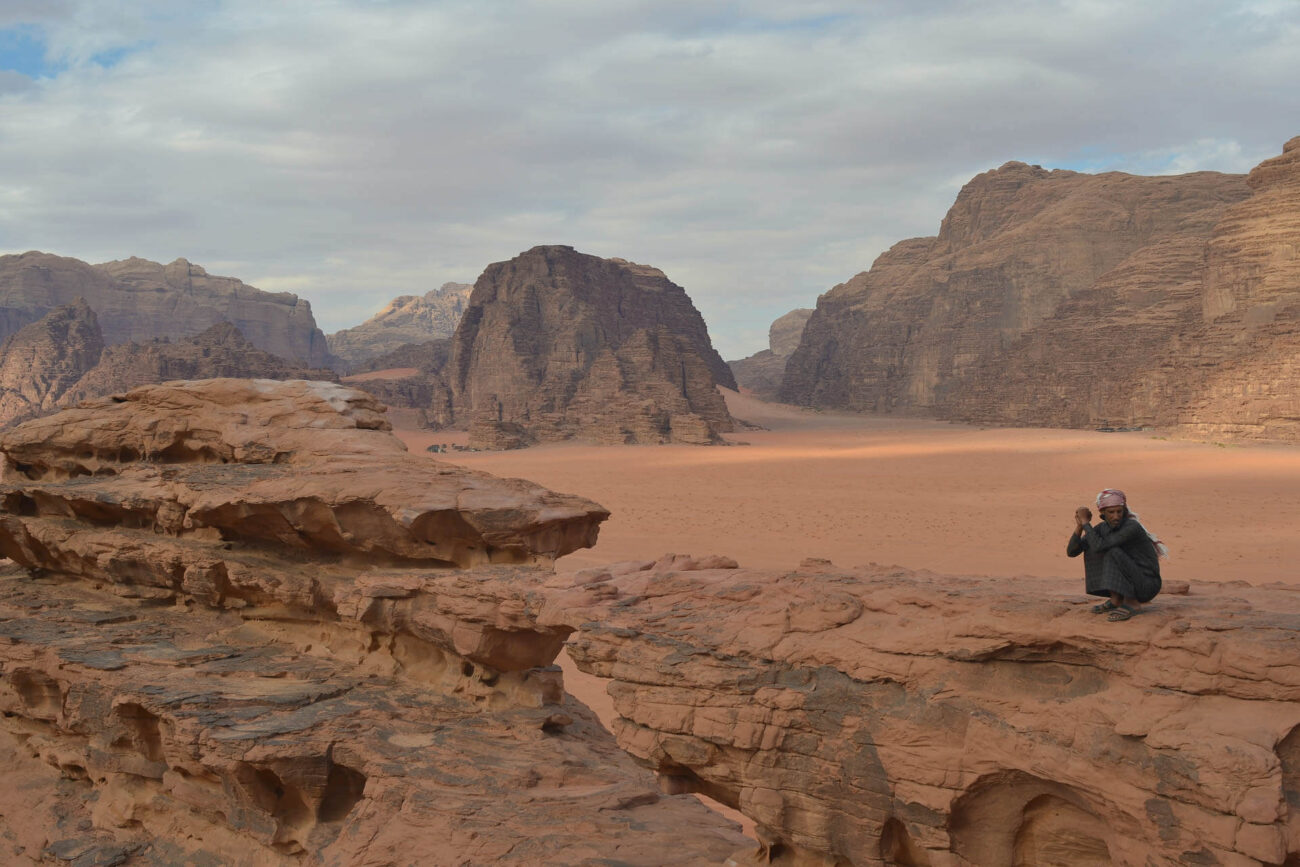 Area with multi-colored rocks and sand. You can climb the dune and enjoy the panorama of Wadi Rum. Dunes can be really steep and this mountain of sand is a clear example of this. To be able to admire the vastness of Wadi Rum, you must first climb to its top. With wild pleasure I took off my sneakers and sank my bare feet in the still cool sand. The sun’s rays were already starting to heat the outer layer, so the temperature was basically perfect. At the end of this walk there is a little rock climbing, and then there is a panorama of the desert. It’s definitely worth getting there! 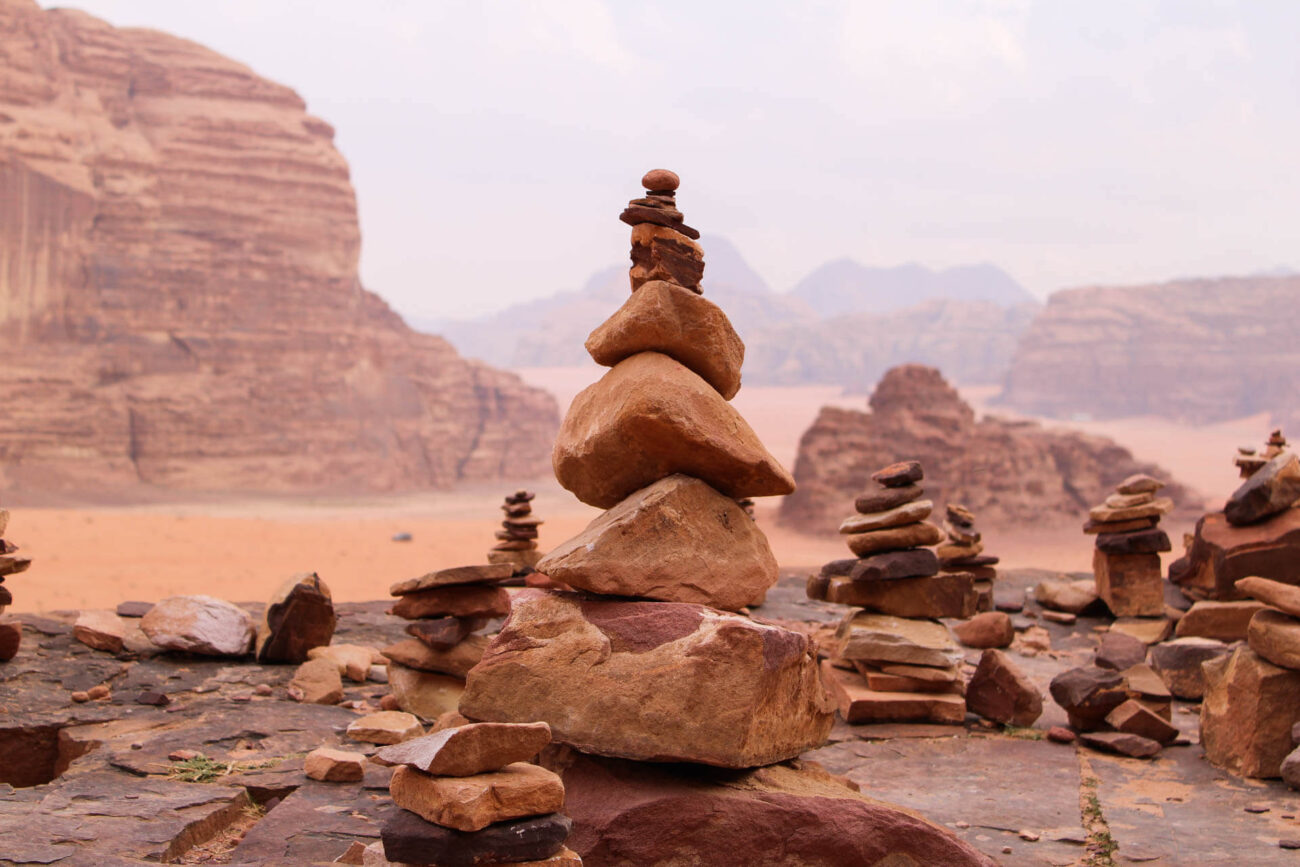 A canyon once used by the Bedouins to hide in the shade from the sun’s heat. On its walls there are rock inscriptions and drawings depicting, among others, human figures. A stream flows through it. The canyon is small – both in terms of length and width. In addition, it is also, unfortunately, very crowded. It is enough for one larger group to enter there, and you have to squeeze between the rocks and wait for your turn to pass. On the walls there are, among others: Islamic inscriptions about God and Mohammed, images of people and lovely looking feet. According to the guide, they served the Bedouins as signposts. You have to look around carefully to see them. Your guardian can help you, who will point out the paintings that are worth paying attention to. After reaching the end of the canyon, you come across … a small pond.

The remains of a building that was intended to serve as an arms depot for Lawrence of Arabia during the Arab Uprising (1916-1918). It is also a scenic spot with the possibility of stocking up on souvenirs. From our perspective, this was the least interesting point. We didn’t like it so much that we didn’t even capture it in a photo. We wanted to get from there as quickly as possible and not waste valuable time. This is where most of the excursions in the valley at that time gathered. It was evident from the number of parked cars, the condition of which we like to assess and compare with ours on this type of trips? We want to know how the company we have chosen compares with others in this respect. Next to Lawrence’s scattered house is a pitched tent selling souvenirs sold by the Bedouins. You can find all of this, and even cheaper, in other parts of Jordan. 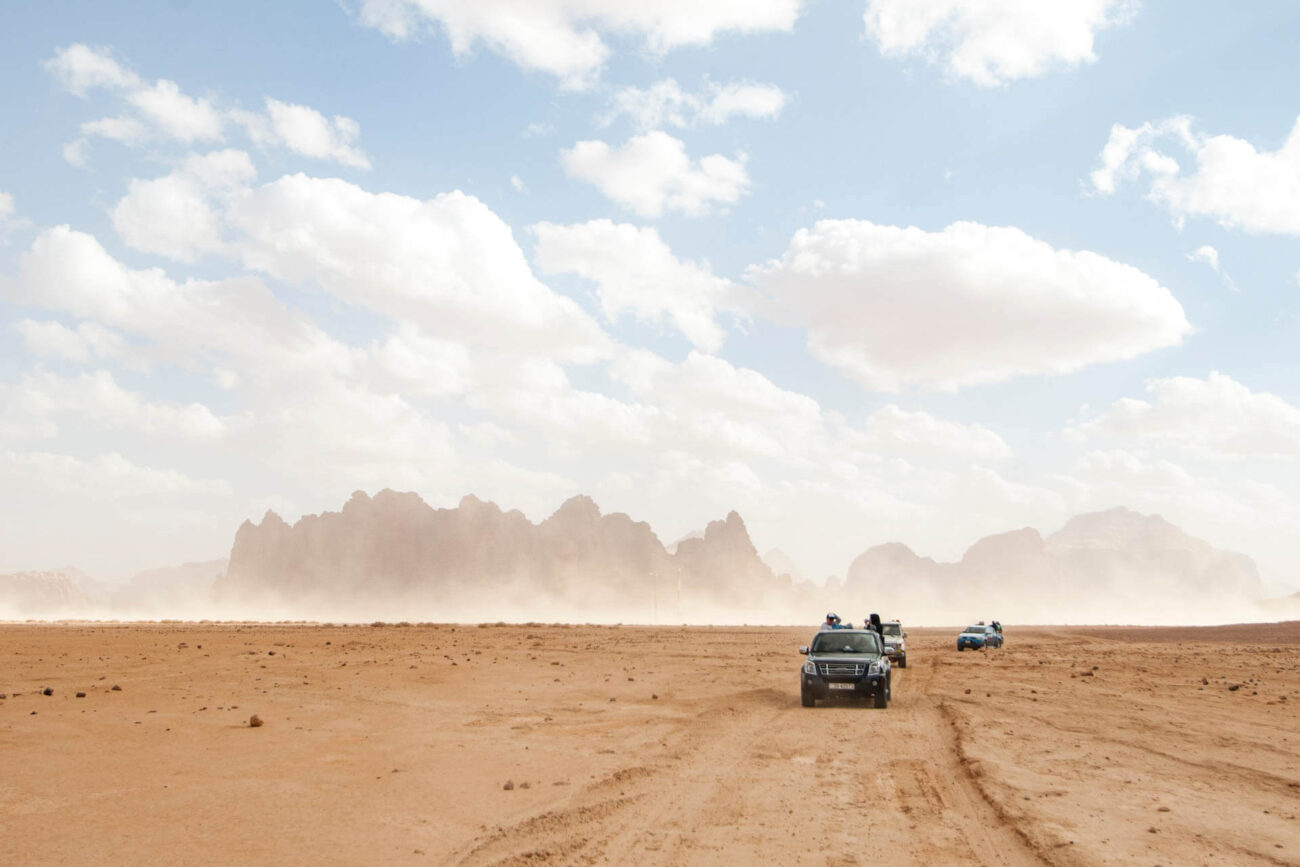 As the name suggests, it is a sandstone formation resembling a giant mushroom. The rock is so characteristic that it has almost become the hallmark of Wadi Rum. Every company that sells valley tours has a photo of the mushroom in its folder. It is strange that it was not included in the original list sent by the Bedouins, but was added on the spot by a guide. For our luck! ? By the way, the rock actually looks like a mushroom.

The natural, most rocky one is situated on one of the hills. It is viewed from a distance. It is possible to go out as part of a several-hour trip. The arch is situated 300 m above the viewpoint. It is located at the top of Jebel Burdah. It takes about 3-4 hours to enter it. As needed, if anyone would like to be able to take this opportunity to run such a business.

A natural rock bridge carved by water and wind. You can climb on it and take a photo. However, you have to take into account the queue, the steep climb and not be afraid of heights. Climbing the Um Frouth Arch is pure madness! Or stupid, I don’t know. Like lambs, we followed other people, believing that with so many people doing it, it can’t be as scary as it looks. And yet it was. I defeated the first episode as fast as I could, so as not to give myself time for fear and hesitation. Just standing on the arch did not cause such fear in me as, for example, in Jacek, who wanted to get down from there as soon as possible. I also saw that some people at the last stage gave up taking a picture of themselves in this place, even though they actually went there for it. It was even worse on the way back. There is a traffic jam because the free space is not large enough for people walking in the opposite direction at the same time to pass through it. It is strange that no accident has yet occurred there.

The second, much wider than Khazali, canyon in Wadi Rum. It takes up to 30 minutes to cover it from one end to the other. This point was also added by the guide. There is nothing spectacular about this attraction, although it is nice to walk through a small part of Wadi Rum, and not just ride a pickup from point to point. The canyon is quite wide, but in one place it is so covered with rocks that you have to climb a bit to continue your walk. After some time, you go out into the open space.

A dune with a view of the red and white desert. A place recommended for photos with a jump up. This place is really great for jumping photos. The elevation is slight compared to that of the red dune, but a photograph taken from the right perspective may suggest otherwise.

A rock that looks like a chicken and a huge egg. You can also watch the sunset from here. This rock really looks like a chicken! If you only put his head on it, it would probably be the largest hen in the world? The scenery around is also fantastic, and in the rays of the setting sun it additionally acquires an intense orange color.

The final point of the trip is admiring the sunset at the place chosen by the guide. This place was just the aforementioned Chicken Rock. There is a small dune next to the rock that you can climb to admire the sunset. The scenery is truly magical. The surroundings then take on such warm, intense colors that you can stand in silence for a while.

Contact
bedouin, camel ride, desert, excursions, guide, itinerary, jeep tour, jordan, wadi rum
We use cookies to ensure that we give you the best experience on our website. If you continue to use this site we will assume that you are happy with it.Ok