I am dressed in everything I brought with me to the deserts: leggings under the jeans, a softshell jacket under the jacket, a woolen scarf, gloves and a hat with a pompon. It is January and the temperature is around 6 ° C. Bedouin mint tea warms me from the inside, it is bright, as if someone has switched on an overhead light above our camp. Only it is the moon that illuminates the desert at night, giving it an absolutely surreal impression. Now I understand why Wadi Rum has played Mars so many times in the movies. No reference points, because after a while every rock looks the same, no illuminated cities, because there are only small Bedouin camps in the desert. Cosmos, I tell you, and in the middle of it all, I am almost alone, because it is still before the season. How did I get here? Since I knew that we were going to Jordan, I was trying to figure out how to see as much as possible in a short time, because in fact I had two days for larger trips. And you must know that Petra is more than 230 km away from Amman, and Wadi Rum is another 95 km. I was considering the scenario of going to the desert for a few hours and then back to the night in Petra to be there for sunrise. Ultimately, however, I decided that an overnight stay in the Wadi Rum desert would be a greater experience and a unique experience for me, and I will return to Petra the next morning. 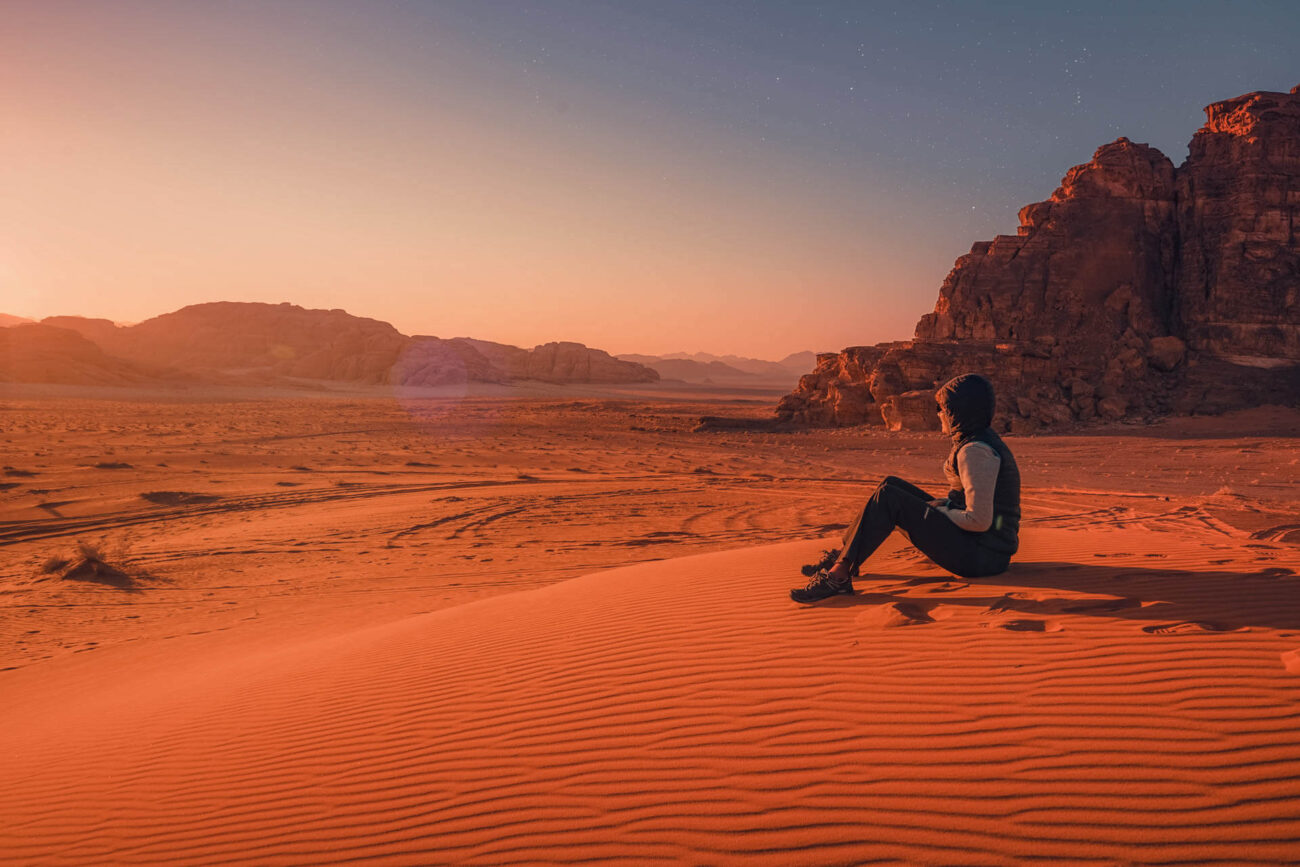 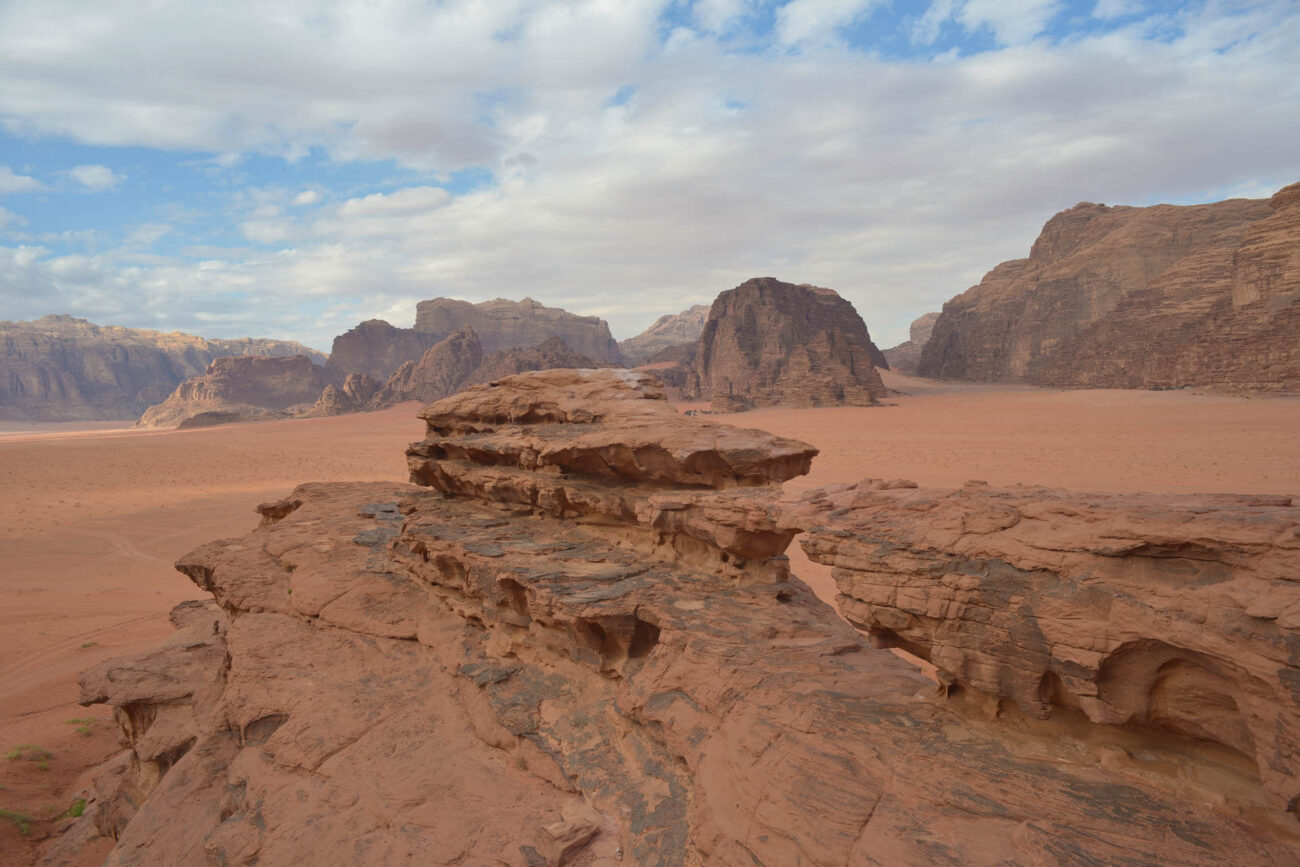 The Wadi Rum desert is a protected area, inscribed on the UNESCO World Heritage List since 2011. Admission to the Wadi Rum area costs 5 JOD per person, unless you are in possession of the Jordan Pass (Jordan visa package + admission to over 40 attractions), then this fee is included in the price. After completing all the formalities at Wadi Rum Visitor’s Center, Ahmad  from the Wadi Rum Bedouin Camp team turns straight into the sand and we rush forward. He knows perfectly well where we are going, but I, although in normal conditions I can boast excellent orientation in the field, do not know where I am. With the sand surrounding us on all sides, it is not difficult to lose perspective. Abdullah, however, knows perfectly well where the road to Wadi Rum Dream Camp leads, after all, he was born and raised here, the desert for Bedouins has no secrets.

What fascinated me from the beginning in Wadi Rum is that it is not an ordinary desert. Though the literal translation of Wadi Rum means sand valley. In my life I have visited deserts in Morocco or Tunisia, stretches of sand to the horizon and nothing else. Wadi Rum is different because the landscape is enriched with sandstone and granite rocks. When we go to the camp, we see a rock called “Seven Pillars of Wisdom” (until 1980 the rock was called Jabal al-Mazmar), in honor of the book of the famous Lawrence of Arabia with this title. Thomas Edward Lawrence, British archaeologist, traveler, military, writer and diplomat, while serving in the Middle East, contributed to the victory of the Arab revolt against the Ottoman Empire. He also opposed the colonial ambitions of European powers in the Arab world, which won over the local population, which gave him the famous nickname. Wadi Rum’s fame came from the cinematography in the 1962 film Lawrence of Arabia. 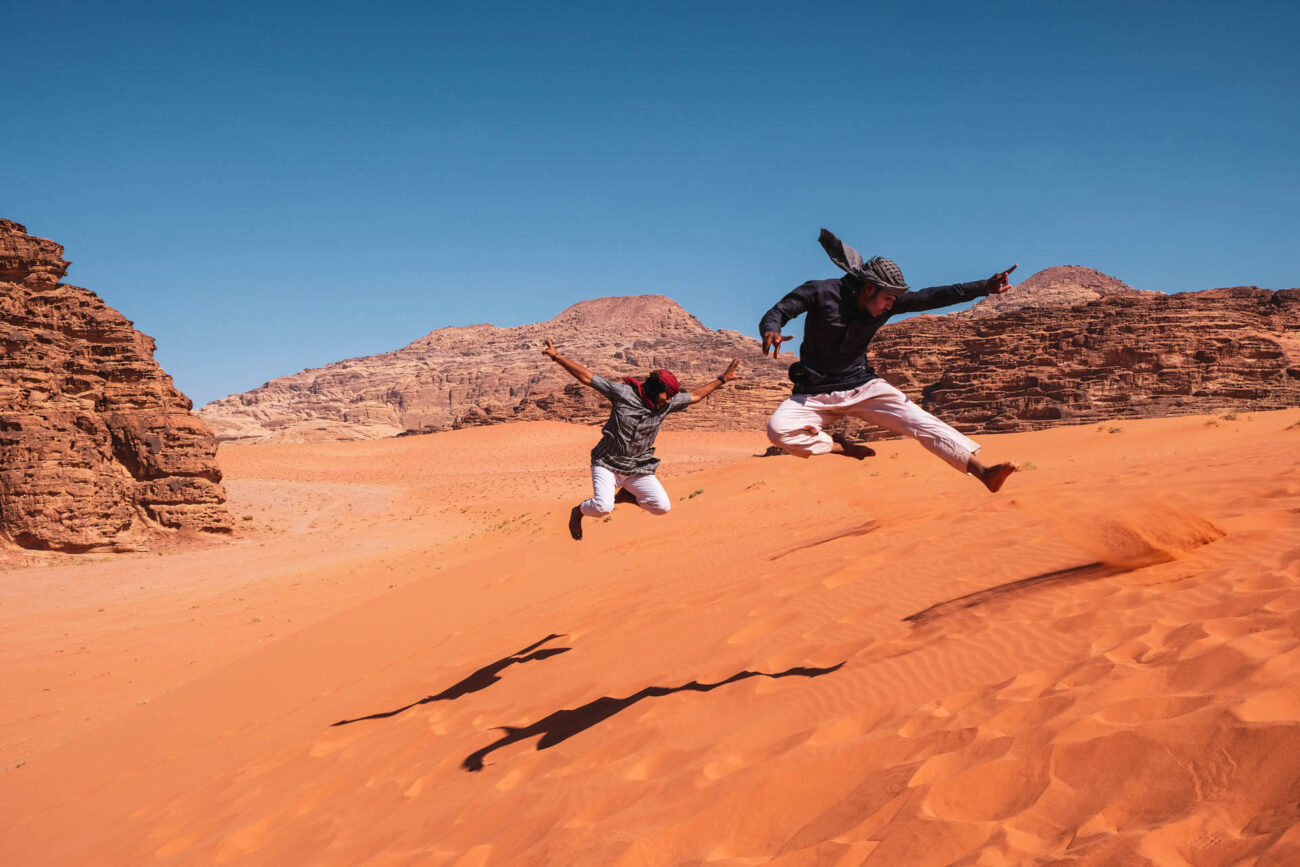 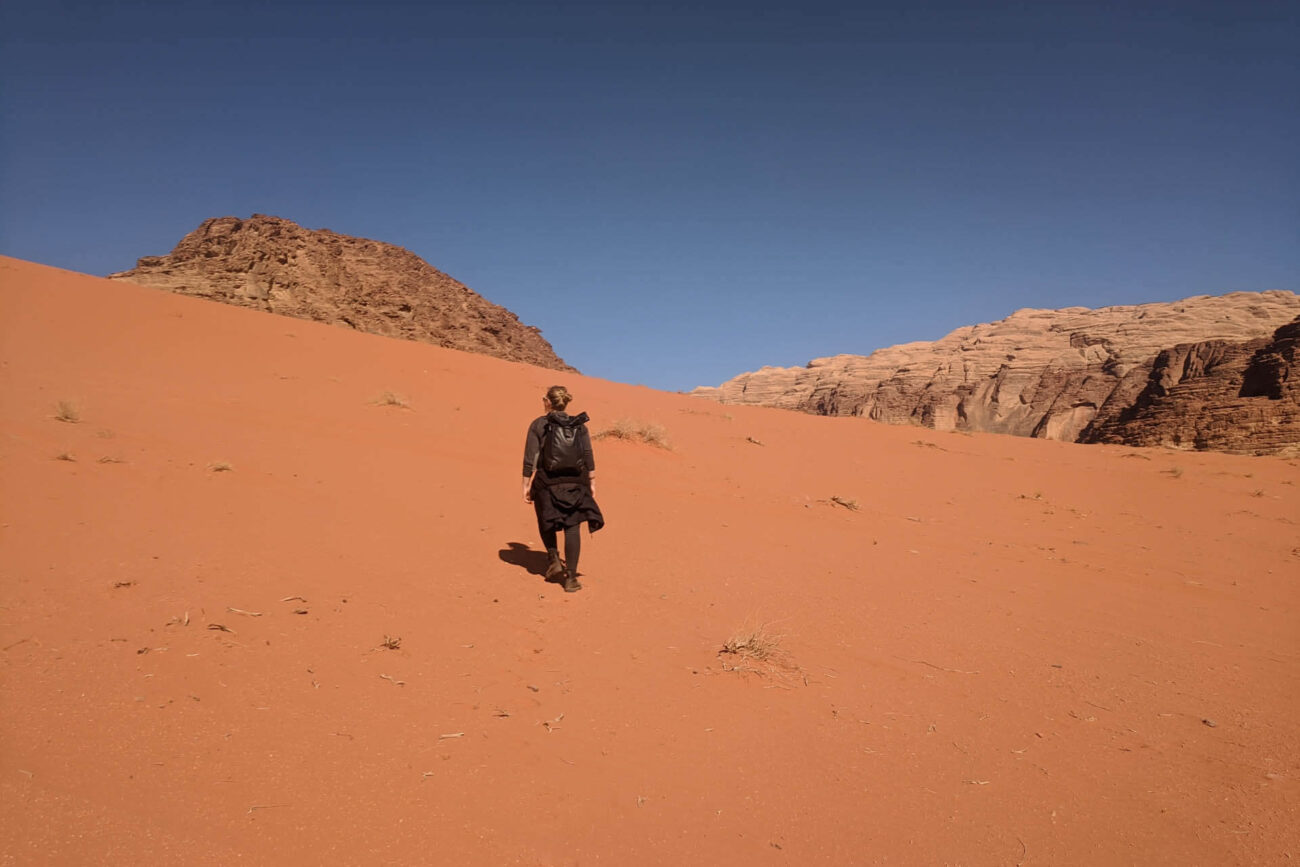 As we are talking about the film, it is worth mentioning a few well-known titles in which Wadi Rum played a supporting role, most often pretending to be Mars: Red Planet (2000), Last Days on Mars (2013), Martian (2015). Sometimes, however, Wadi Rum simply played the desert: Breath of the Desert (1998), Transformers: Revenge of the Fallen (2009). Wadi Rum also appeared as Jedha in Rogue One: A Star Wars Story (2016) and Prometheus (2012). Apparently, Wadi Rum will also appear in the feature version of Aladdin, which is currently being shot, with Will Smith. After arriving at the camp, she is greeted like a long-lost family member, I have to worry about nothing and have fun in the desert. On the way from the Visitor’s Center we agree with Abdullah that he will take me on a 4-hour safari in his Toyota Hillux, Jordanians’ favorite car. So I leave things in my tent, take off a few layers of clothes that were necessary at 5am in Amman, but no longer needed in the desert at high noon, and I’m ready for a desert safari.

One of the most famous prehistoric peoples inhabiting the Wadi Rum area were the Nabataeans, who left behind rock paintings and petroglyphs. Wanderers left each other information on the rocks to show the way to the oasis, and the direction was marked by painted camels – you had to go in the direction of the camel’s face. They are dated 1000-800 BC. Cosmos.

While exploring the desert, we visited the remains of the alleged Lawrence’s house, the Umm Fruth Rock Bridge, the mushroom rock, the canyon where the rocks converge at some point and no longer allow us to pass. The surreal atmosphere of Wadi Rud makes you lose any sense of time here, in addition, I have the impression that apart from me and Ahmad, there is no one here. There aren’t many visitors in January, even if my camp has fewer visitors than staff: it’s just me and a couple from Spain. Only in Bedouin cafes, located next to the most important attractions, you can meet other tourists. I am lucky that Abdullah treats me as his, so at each stop for mint tea, he invites me to join his group of friends, often close or distant members of his Bedouin family. And although I have no idea what they are talking about, I feel part of this place, especially when a camp cat gets stuck to me and lays down on my lap in no time.

As we ride, Ahmad notices that I shift gears with him. So when he asks if he wants to lead, I don’t think a second. Toyota Hillux is my dream car, and I will be able to drive it in the desert! It’s nice to slide on the sand, sometimes press down to climb the sandy hill. I spend a good half an hour behind the wheel, and Ahmad’s friends watch with curiosity as tourism leaves the steering wheel. Definitely a brilliant experience, although I would like to point out that your guardian does not have to agree to it.When 5 p.m. approaches, we go to the observation point from where we can admire the sunset. There are times in life when a picture says more than a thousand words, and this was also the case here.

As soon as the sun goes down, it immediately gets colder, so after dinner, when it is already dark, you have to dress warmly. Although the concept of dark is rather relative, because the moon shines indecently bright. Warming up with mint tea from the inside, I observe stars and constellations, although I have never been particularly good at these blocks.I manage to take some good night shots of the night in the desert, then go to the tent, prepare myself a lair for the night. The tents are not heated, so I have to make sure that I am warm at night, because the expected temperature is 2 ° C. I sleep in Brubeck’s thermal underwear, which worked for me during a night in a tent in winter, 350 km beyond the Arctic Circle, double woolen socks, a softshell jacket and a hat, and I have two blankets to cover. I sleep the night without any problems and get up just in time for sunrise, although I admit that the decision to get out of the warm surroundings is difficult. But when will I have the second chance to watch the sunrise in the desert? Wrapped up to the top of her head, she wanders not far from the camp to catch the rising sun. I feel a bit like Mat Damon in Martian.

It was a key issue for me, because while getting to Petra is not a problem, traveling on the same day is unfortunately a challenge. The JETT bus to Petra departs daily at 6:30 AM from Amman and arrives close to the Petra Visitor’s Center at 10:30 AM (11 JOD one way, 18 JOD return on the same day). On the other hand, the bus (minibus) from Petra to Wadi Rum departs between 6 and 6:30 am and it is the only trip during the day. The journey takes between 2 and 2.5 hours and costs 10 JOD. So I wrote to a camp in the desert of my choice, where I planned to spend the night, Wadi Rum Bedouin Camp, and its owner, Ahmad, offered to help and arranged for me to transport from Petra to Wadi Rum in a private car for 35 JOD one way. Sometimes, when time is not our ally, money takes a back seat and the price was competitive compared to a regular 40 JOD taxi. The journey to the edge of the Wadi Rum desert took us 1.5 hours, from where Ahmad, a boy from the Wadi Rum Bedouin Camp team, picked me up. The next day I returned to Petra with Rakan because the first bus departed from Rum village (Rest House stop) only between 9 and 9:30, and at 10:30 I had an appointment with the girls I split up with in Amman to explore Petra together. 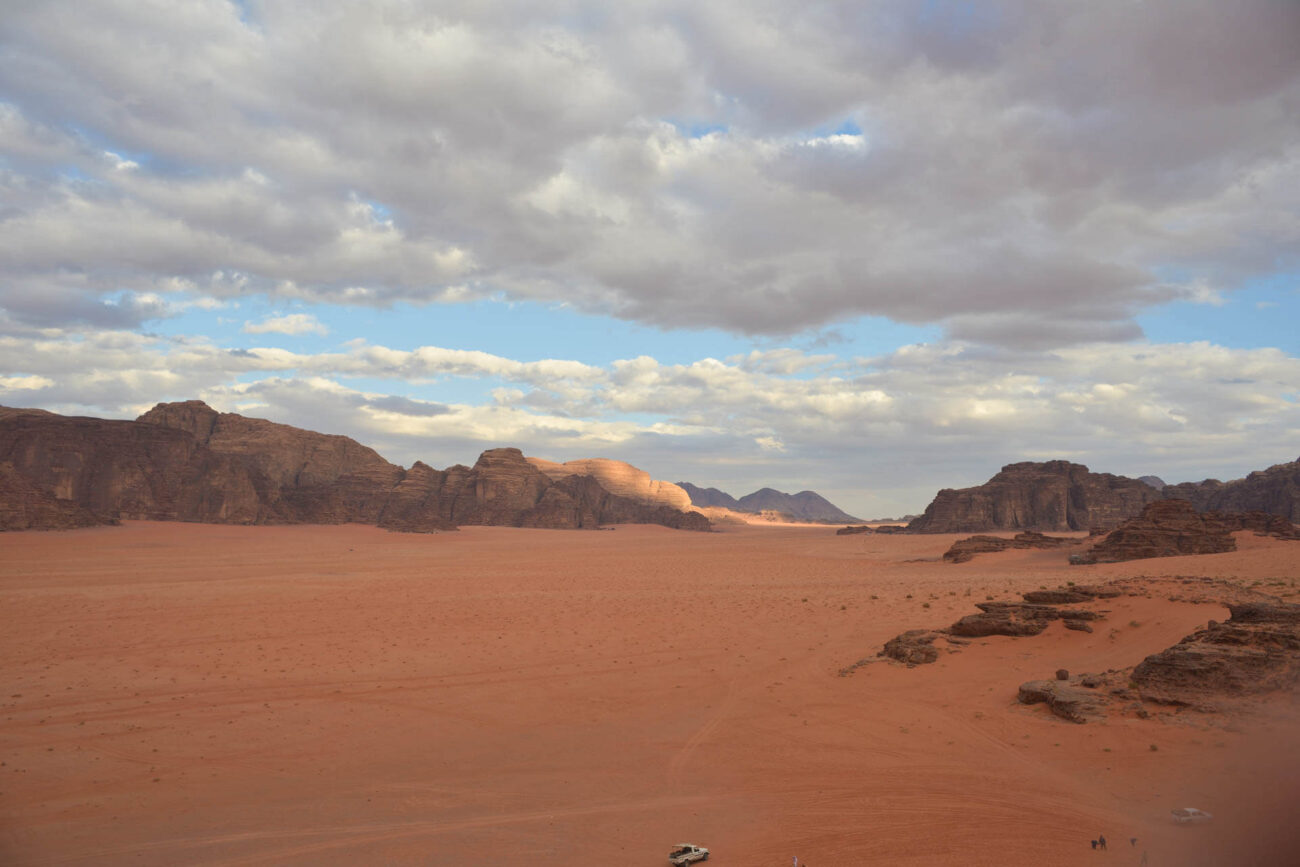 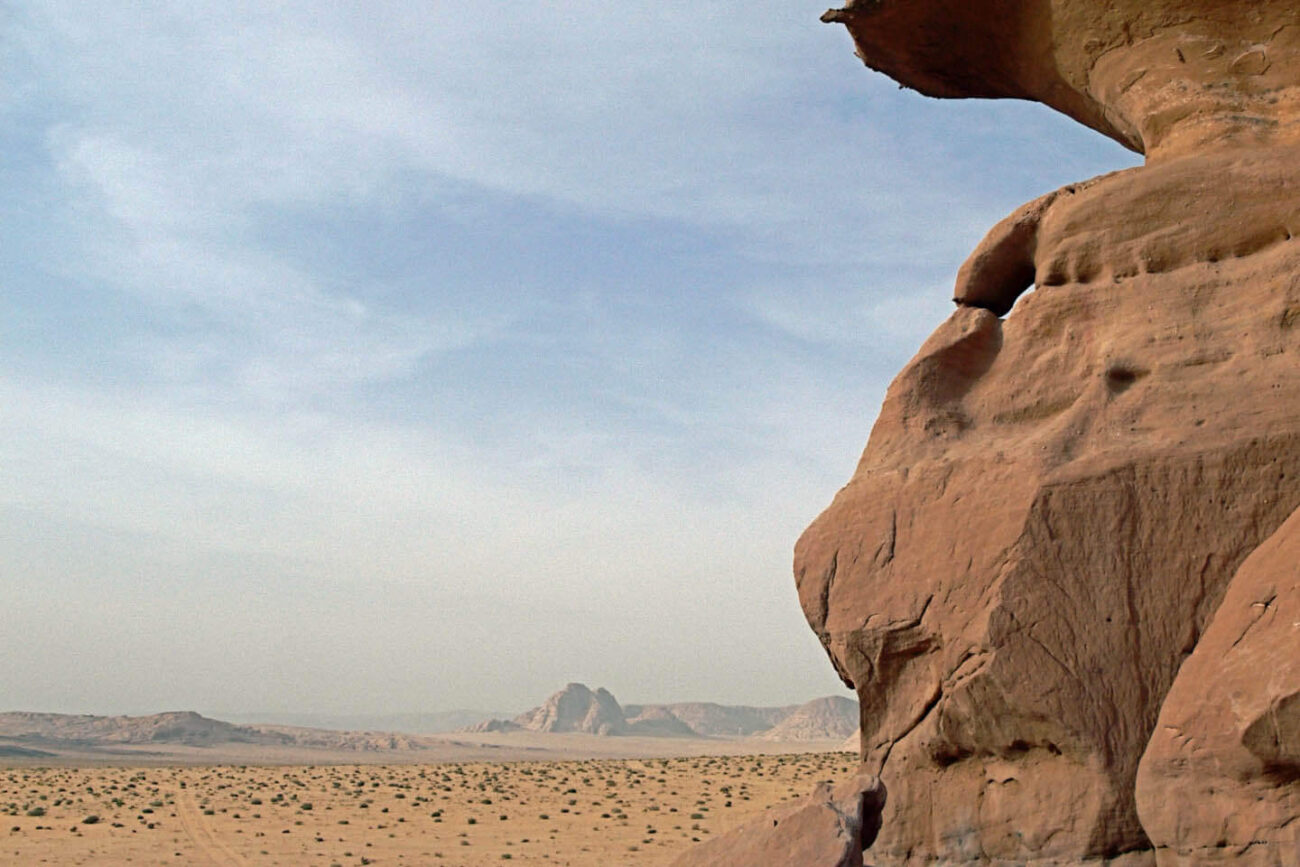 In the case of Wadi Rum, it is not only a place to sleep, but the whole experience and stay in the desert, so it’s important to choose a proven place. You already know that I decided to go to Wadi Rum Bedouin Camp, which was recommended by my friends travel bloggers and it was absolutely a bull’s eye. I just arrived before the season and instead of the 1-person tent with a shared bathroom, which I ordered, I got a 3-person tent just for myself, with a bathroom in addition. The price of the stay – 25 JOD included breakfast, and for an additional 10 JOD I also bought dinner, because in the middle of the desert there is nowhere to jump out and have a snack. The campsite is a short drive from the Wadi Rum Visitor’s Center, where you will be picked up by someone from the Wadi Rum Bedouin Camp team. In addition to the tents, in the central part we have atmospheric seats around the fire, where you will always find (free) mint tea, one of the Bedouin specialties. Breakfast and dinner are served as a buffet in the main tent. The team will also organize a wonderful jeep safari for you and will look after you like a family member. I will remember my stay there for the rest of my life, not only because of the absolutely surreal location and views, but also because of the great reception and great people.

Contact us by WhatsApp
We use cookies to ensure that we give you the best experience on our website. If you continue to use this site we will assume that you are happy with it.Ok